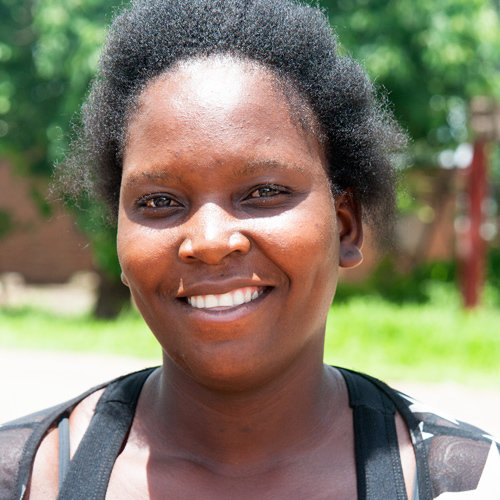 Zelipa’s story is a little more unusual than most of our applicants. She has been married and has two young children, an 8 year old daughter called Sheeny and a son, Rooney who is 6.Zelipa is divorced from her husband and her mother will care for her children if she returns to school.

Some years ago Zelipa attended primary school and sat for her Certificate of Primary Education exams – known locally as the Grade 7 exams - which she passed.Less than a year later she was married. When Zelipa got divorced she decided to try and complete her education and returned to primary school sharing a classroom with pupils half her age. Last year she sat her Grade 7 exams for the second time and passed with a great aggregate score of 745. Here are her results:

Both Zelipa’s parents are alive and she has 7 siblings: two brothers 5 sisters. Both the boys live elsewhere but her sisters still stay in the family home. As subsistence farmers Zelipa’s parents are unable to grow enough to pay school fees for the four girls who still attend school. They now also care for Zelipa’s children. Zelipa is a mature young woman who has realised that education will make a huge difference to her future. She is sensible and determined to succeed and we hope that someone will help her have a chance to discover her potential.

She has been offered a place at a school some distance from Mfuwe but we are hoping to secure her a place at our local secondary school, Mfuwe Day Secondary School. She will still need to attend as a boarder as her home to too far for her to travel to and from on a daily basis but it will be easier for her to return home during the term to see her children. She'll also be able to join our Girl's Club to help her settle in as a more senior pupil and where she may make a great role model to the other members.