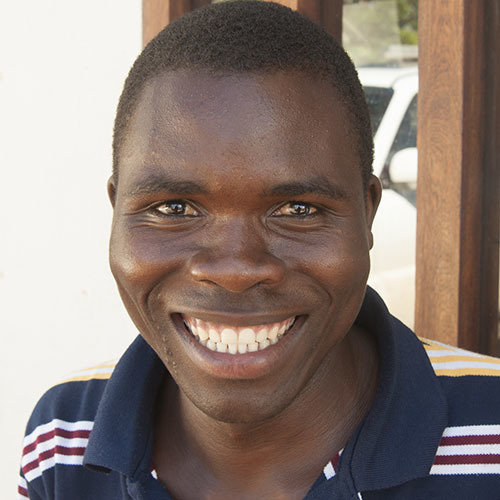 Simeon’s parents are both alive and provide for their family by subsistence farming.He comes from a family of ten children and is the third born. He has an older brother and sister, three younger sisters and a younger brother. Of all these children only four have sought an education; the rest have either refused to go to school or just attended for a short while.

At one point, under pressure from his siblings and family to help in the fields as well as lacking the funds to pay school fees Simeon also stopped going to school and from 2009 through to 2015 he stayed at home. He tells us that one day he started thinking about life and how he needed an education in order to better himself and help his family but his friends and neighbours discouraged him from returning to school. But Simeon was determined and in 2016 he raised some funds and managed to return to school. During the holidays he did piecework (odd jobs) to pay his school fees but often this was not enough and he was sent home from school.However he persevered but over the past couple of years his fees have doubled and now he is unable to manage to work and study.

2019 will be Simeon’s penultimate year at school and in November 2020 he will sit for his final exams – the School Leaving Certificate. Simeon’s determination to get an education makes him stand out in his family stand out in his family and we would like to see him supported in his last year and be free from having to work in his spare time and be able to study instead. Here are the marks we have for Simeon for last year: