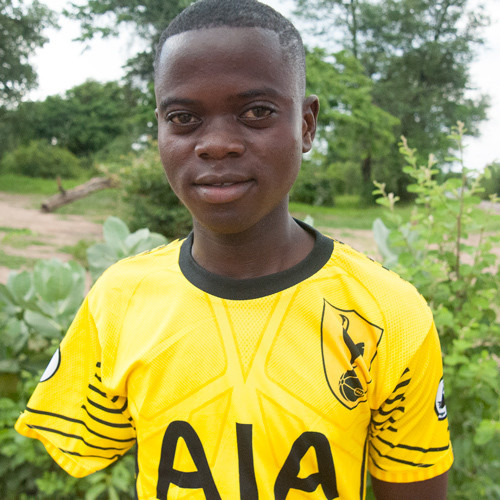 In 2014 Nelson was playing football when his ball became stuck in a tree.He climbed the tree to try and get the ball down but as he poked it with a stick he lost his balance and fell, breaking his right arm in three places.He was taken to a local hospital around 60 km away and then later onto the hospital in Chipata. It was at Chipata Hospital that he was told that they could not set his arm and that it was so badly damaged that they had to amputate it. He stayed in hospital for 2 months and during that time and with encouragement from a doctor, taught himself to write with his left hand.

His determination is to be admired.All this happened in the same year that his father died of TB and he was to sit his final Certificate of Primary Education or his Grade 7 exams. His accident happened at the end of June causing him to miss two months of term 2. He returned to school for term 3 and a month later sat for the exams using his newly acquired skill of using his left hand for writing.Nelson achieved a good score in the exams and went on to attend Matula Secondary School as a day scholar for grades 8 and 9. He again did well in the Certificate of Junior Secondary or Grade 9 exams attaining an aggregate score of 400. He continued attending Matula Secondary School for grades 10 and 11 and is now about to enter his last year at school and grade 12. Here are his available end-of-term test results for those grades (Term 1 reports are unavailable). As you'll see he has achieved some very good marks.


First born in Nelson’s family are twins, Peter and Rabecca who are 22 years old. They both stopped school at the end of grade 7 as the family had no money for secondary school fees. He also has three younger sisters who are all at primary school.They all live with their mother who, with the help of the twins, provide for themselves and the family by subsistence farming.

Nelson is a lovely articulate boy who wants to study medicine when he completes school. He is in his final year at school. His sponsorship donation includes a solar light to help him study at home as his house has no electricity.