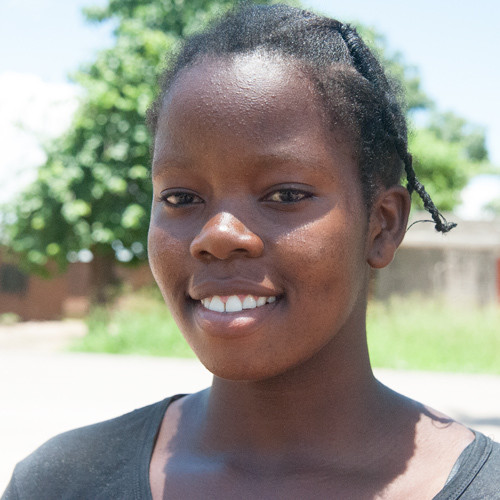 In spite of Monica’s parents being alive she lives with her Uncle, Aunt and four cousins.Monica’s original family are from the Katete area but are poor and survive through subsistence farming. She has three older brothers, three older sisters and a younger sister. Monica thinks she was 11 years old when her uncle came to collect her to take to his own home.Her aunt had two sons at that time and needed help in the house so Monica went to live with them.At that time they lived in Jumbe but later moved to Mfuwe and had two more children.

Luckily Monica was able to keep going to school and attended Jumbe Primary School and later Chiwawatala Basic School.It was at Chiwawatala that she sat for her Certificate of Junior Secondary Education exams and came top of the whole school in these exams.Here is a breakdown of her results:

Monica has been offered a place at Mfuwe Day Secondary School and we think it would be best if she attended as a boarding pupil to give her the best chance of achieving her potential.Monica is a lovely bright girl who speaks good English and loves to write long letters about her life. If she finds someone to help her attend Mfuwe Day Secondary School she will be able to attend the Project Luangwa Girls' Club which, we feel, greatly benefit her.