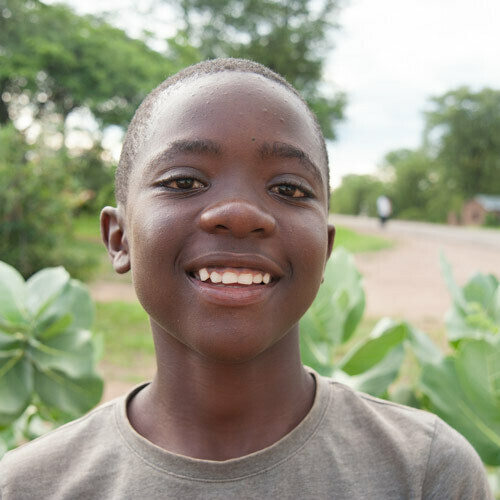 Maxwell Zimba was born in 2004 and when he was 6 years old his mother married his stepfather.Two years later he started school. There he learnt to play chess well enough to be chosen to represent his school in the 2018 Provincial Championships in Lusaka.In that same year his father was involved in a fatal road accident and he sat for his Certificate of Primary Education exams.

Because of his father’s death Maxwell was sent to live with uncle, Simon, in Mfuwe. He applied for sponsorship at Project Luangwa in January but was refused as his uncle had a job – even though it was fairly poorly paid.Simon managed to pay Maxwell’s school fees for term 1 (January to March) at the local secondary school where Maxwell attended as a day pupil.

However Uncle Simon lost his job and Moses was not able to return to school. They went to the head teacher at Mfuwe Day Secondary School who then wrote to us for help. We were impressed with Maxwell and happy to accept him onto our sponsorship now that his circumstances had changed. Here are his exam results.

Maxwell is a bright boy who did well in his final Primary School exams. He scored a composite score (best 6 subjects including English and the 2 IQ tests) of 785. This is an excellent and above average score. Here are the details.

You can get an idea of which subjects the pupil likes or is good at by looking at his or her marks. English and mathematics are obvious but you might like an explanation of the other subjects. Social and Development Studies is all about geography, history and civics. Zambian Language is the study of one of the many languages used in Zambia; in this area it is Chinyanja. Creative and Technology Studies is a mix or practical subjects such as arts and crafts. The marks may also indicate the type person, especially when it comes to the Special Papers; Special Paper 1 is a simple and basic IQ test based on English and Maths logic and Special Paper 2 is a basic visual IQ test based on patterns.

As we are now halfway through the year Maxwell's sponsorship costs do not include the fees for term but do include the cost of uniform and all his school needs - the latter as his Uncle Simon was unable to provide more than the very basics in his first term. The sponsorship fee listed will cover Maxwell's costs and all his needs until next January