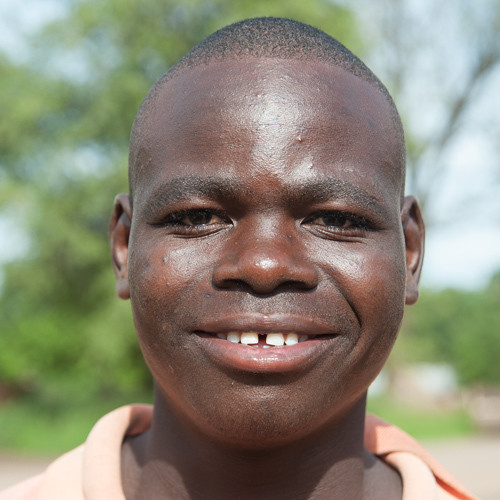 Joseph comes from a very remote area to the far north of Mfuwe and even to the north of the Nsefu Chiefdom.His village in Mwenya Chiefdom and he speaks Bisa as his first language (a language spoken only in a small area) as well as Nyanja and English.He says that he finds English difficult in comparison to Nyanja which he says is an easy language. In written English he said that he has the most difficulty with punctuation but when we tested him he was very good in comparison with many other pupils.We tested his understanding of spoken English too. He managed to translate from English to Nyanja well. He says he tries and is keen to get better. He is likeable and very serious about his education.

Both Josephs parents have passed away. He is the first born the family and has two brothers and a sister; they all stay with their uncle. Their village is remote even by Mfuwe standards and is all but cut off during the rains.Joseph travelled for many hours by bicycle through areas full of wildlife to get to our office and had to cross several rivers.

He attended Chasera Primary School, an underfunded rural school with almost no teaching resources. In 2016 he sat for the Certificate of Primary exams and passed but was unable to go on to secondary education as the family had no money and had not heard of Project Luangwa.This meant that he lost his place at the new school and also that to qualify again he would have to resit the exams to win another place.Last year he retook the exams gaining a good score of 739. This gained him an offer of a place at Chizongwe Technical Secondary School which is reputed to be one of the best schools in the Eastern Province.

We are very impressed with Joseph. He has battled against some very adverse odds which accounts for his age of 20 years when just finishing at primary school, gained a great exam score and has won a place at a good coveted school. We have not known any other applicant from his area to be offered a place at Chizongwe. It would be a great shame if, after all this effort, he is unable to take up a place at secondary school yet again.

You can get an idea of which subjects the pupil likes or is good at by looking at his or her marks. English and mathematics are obvious but you might like an explanation of the other subjects. Social and Development Studies is all about geography, history and civics. Zambian Language is the study of one of the many languages used in Zambia; in this area it is Chinyanja. Creative and Technology Studies is a mix or practical subjects such as arts and crafts. The marks may also indicate the type person, especially when it comes to the Special Papers; Special Paper 1 is a simple and basic IQ test based on English and Maths logic and Special Paper 2 is a basic visual IQ test based on patterns..